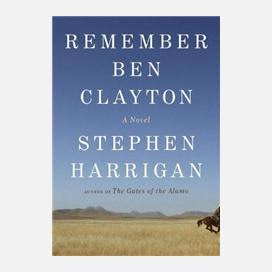 Texas novelist Stephen Harrigan only gets better. Remember Ben Clayton (Knopf, 2011) is his latest masterpiece, and because of its accomplished literary gravitas, I was very much reminded of Wallace Stegner. This is a novel of substance! I was lucky to pick up an advanced reader's copy at the TLA conference; the official publication date is May 24, 2011.

Who is Ben Clayton? He is a young soldier who died in France during World War I. His father, Texas rancher Lamar Clayton, wishes to immortalize his son by commissioning a sculpture in his honor. He hires Francis "Gil" Gilheaney to design the piece. Gilheaney is a sculptor who fears his best days may be past, yet when he visits the remote ranch setting where Clayton envisions placing the sculpture, his deepest artistic ambitions are stirred. Ben had a horse he loved, and the horse too will be created in bronze. At this point, readers too are bound to start envisioning the sculpture; I know I did...

These two characters are satisfyingly complex, as are others I will tell you about in a minute. Lamar Clayton has an interesting back story. As a child he was kidnapped by Comanche Indians, and grew up learning their fierce warrior ways. Both men are widowers. Gilheaney hid the very existence of his marriage to a non-Catholic from his very Catholic mother, a holy card painter. This secret grew to include the existence of his only child, a daughter, Maureen, who is very much her father's artistic helpmate and an aspiring sculptor herself. Maureen's somewhat late coming of age is also an intriguing part of the plot. The fourth character of substance is a young soldier named Arthur Fry, Ben's GI buddy who was with him when he died in battle. Arthur's face is so torn up, he decides to stay on in France after the war rather than face going back to the States. During the course of the novel, he and Maureen become pen pals, and eventually Arthur meets both Maureen and her father when they travel to France. These characters' stories are deftly interwoven and deeply compelling. The sculpture commission has its setbacks, and there are many personal crises revealed and resolved as this beautiful novel plays out. I've been travelling these last few weeks, doing plenty of reading along the way, but this is the novel that stuck with me.

At the TLA conference a few weeks ago, I heard a fellow librarian comment that World War I stories are almost becoming a genre themselves. Others fast agreed, thinking of the Maisie Dobbs series by Jacqueline Winspear, as well as novels by Anne Perry, Jeff Shaara and Ken Follett, to mention a few.
Stephen Harrigan's books always have strong Texas settings, but this time around, elements of France and New York City also add to the success of the novel. When I read Jacob's Well (set in and around Austin) by Harrigan shortly after it was published in 1985, I knew I wanted to read more of his writing. From then on, I mostly came across his nonfiction pieces in Texas Monthly magazine. Many of those fine writings are available in his essay collections. But it is his novels that bring me the most joy. He won the Spur Award for the Best Novel of the West from the Western Writers of America for The Gates of the Alamo (Knopf, 2000). Also a screenwriter, Harrigan is a University of Texas faculty member at the James A. Michener Center for Writers. While researching his life for this blog post, I learned he is involved with Capital Area Statues, Inc., a nonprofit group that raises funds for public monuments celebrating the history of Texas. (Now I know how the wonderful Philosopher's Rock sculpture at Barton Springs Pool in Zilker Park, Austin came to be!)
For a short video of Stephen Harrigan discussing the genesis of Remember Ben Clayton and other matters, click here to visit the Texas Monthly website.
Posted by LoneStarLibrarian at 8:41 AM

Art for sale in Houston: